THE "GREAT WAR" WAS NEVER THE GREATEST WAR IN AUSTRALIAN HISTORY 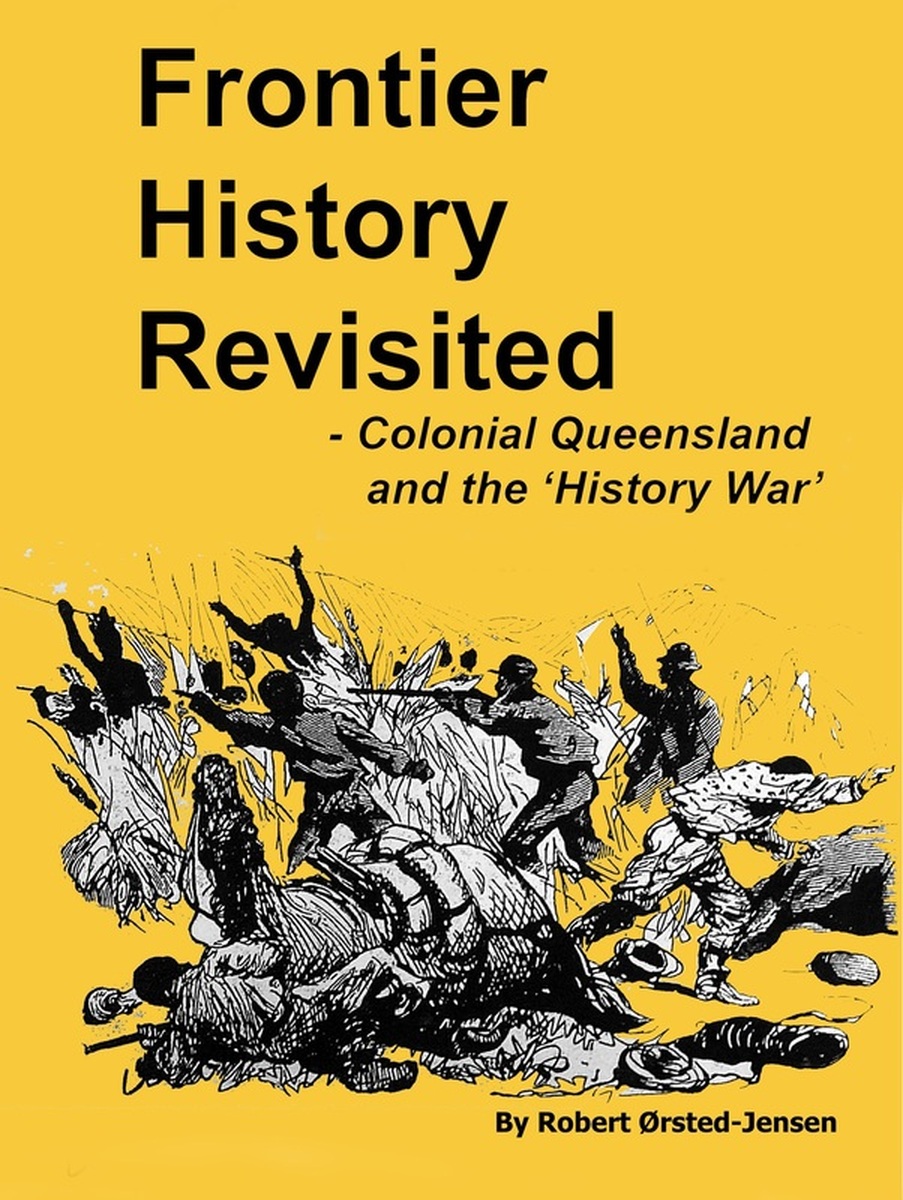 ...or why the latest chapter in the Australian 'history wars' was never more than badly-equipped political spin-doctoring and a very post modern style of 'journalism'.

The Australian 'History War' is here being viewed from the perspective of a Danish Historian.


‘Frontier History Revisited – Colonial Queensland and the History War’ (278 pages, indexed and illustrated, published by Lux Mundi Publishing, Brisbane 2011, ISBN-10: 1466386827 & ISBN-13: 978-1466386822), see cover note below, is available for online purchase now and is available for ordering at fine bookshops in your neighbourhood.

Note that the price is US$27.95, the retail price in Australia is naturally depending on the current US$/AU$ exchange rate).

Priority shipping from the US to Australian cities frequently taskes  5 business days, and not as indicated 9 business days.

The book is otherwise  available for wholesale ordering via  Ingram.

Frontier History Revisited
…has received a number of comments and reviews

Stuart Macintyre, professor of history at University of Melbourne, co-author of ‘The History Wars’, author of ‘The Oxford History of Australia, 1901-1942: The Succeeding Age’ (volume 4), ‘A Concise history of Australia’ and ‘What if? - Australian history as it might have been’, and otherwise described as ‘one of Australia's most influential public intellectuals’, characterised ‘Frontier History Revisited’ as:

Raymond Evans, Associate Professor of University of Queensland, author of amongst other books ‘A History of Queensland’ and ‘Fighting Words, Writing About Race’ and co-author of ‘Race Relations in Colonial Queensland’. Arguably Queensland’s most outstanding historian in this field, characterised ‘Frontier History Revisited ‘as:

‘…a deeply researched, thoughtful and ultimately devastating response to the whimsical Windschuttle view of Australian colonial settlement. It demonstrates conclusively that Queensland should be seen as the key zone in determining the violent nature of Australian frontier conflict.’

‘Meticulously researched and passionately written, Robert Ørsted-Jensen's “Frontier History Revisited” demolishes the self-serving view of a peaceful Queensland past with keen eye for detail and context. His achievement will challenge the academic funding bodies and publishers to ask why university historians are not undertaking more ground-breaking research like this.'

Timothy Bottoms, author of ‘Conspiracy of Silence'  in the journal of Aboriginal History (Volume 36, 2012), concluding:

‘Frontier History Revisited is an extremely valuable contribution in understanding colonial Queensland and sets a very high standard in historical research. This work is a ‘tour de force’ and is a ‘must have’ for those wanting to understand the colonial machinations of Queensland’s early politicians and is a damning indictment on those contemporary critics who would deny the true extent of brutality on Queensland’s colonial frontier.’

‘Ørsted-Jensen must be commended for his tenacious and careful scholarship in answering Windschuttle and advancing our knowledge of frontier history. ....he deepens the work done by Noel Loos and Henry Reynolds on the statistics of Queensland's violent frontier.... as a search for truth about Queensland Aboriginal-settler history it is an essential book in the tradition of Loos, Reynolds and Ray Evans.'

Henry Reynolds, Australia's most eminent historian in this field, provides an extensive and favourably comments to this book and the research behind, in his latest  book 'Forgotten War' (Sydney 2013), saying amongst others that:

‘Robert Ørsted-Jensen has completed a massive study of the frontier wars…a richly documented study…establishing beyond reasonable doubt that violence accompanied the expansion of settlement in Queensland and that this was known, openly discussed and accepted by colonial leaders in politics, business and the press. There is a vast archive of relevant evidence in the many newspapers, speeches in parliament, statements made to official inquiries, books by visitors and reminiscences of old pioneers. Ørsted-Jensen makes clear that the activities of the Native Police were well understood, as was the widely used term ‘dispersal’, which unambiguously referred to the practice of shooting indiscriminately into Aboriginal camps. Colonial opinion embraced the view that such punitive action was a necessary accompaniment to successful colonisation. It was also widely accepted that when Aboriginal bands killed or wounded settlers it was imperative to take severe retaliatory actions killing widely and disproportionately. Attacks on stock and crops required a similar response. Anything less would encourage further defiance, which would merely prolong frontier conflict. There was also a widespread understanding that the colony was engaged in a kind of warfare similar to conflict fought in other parts of the empire.
Ørsted-Jensen also shows that there was a persistent debate about the need to exterminate the hostile tribes. His richly documented work shows that not only was Queensland distinguished by the extent of frontier violence, it also provides the researcher with a rich source of contemporary commentary. The many newspapers often contained reports or letters that provide detail of brutal Native Police action or violence of settlers along with a constant stream of reports about Aboriginal hostility. The frontier newspapers have an immediacy that makes for compelling reading.’

Frontier History Revisited: Colonial Queensland and the ‘History War’ is an excellent book, a very important contribution to the literature on the invasion of Aboriginal and Torres Strait Islander Australia. In the process the author destroys the ideologically distorted vendetta advanced by Keith Windschuttle and his supporters in the so called History War. To date, Windschuttle has not made any response that I am aware of. In this book, Ørsted-Jensen is able to estimate that 1490 Europeans and their associates were killed in frontier warfare in nineteenth century Queensland and well over 30 000 Aboriginal people. Since publication in 2011, Ørsted-Jensen and Ray Evans have estimated very conservatively that well over 65 000 Aboriginal men, women and children were killed in frontier warfare in what is now Queensland. I suspect that this could mean many more than 100 000 in the whole of Australia. It is clear that more Australians were killed in the struggle for the land in Queensland alone than were killed in World War 1 which resulted in the greatest loss of life of Australian armed forces in recorded history. We rightly venerate our Diggers’ courageous sacrifice. Yet most Australians are unaware of the loss of life resulting from the British invasion of Australia and most who are aware of it shrug it off: that’s just history – the tough luck Charlie response. This book is a clear challenge for Australians to confront this history appropriately at all levels of our education and in the media. Otherwise we will continue to live a tragic lie. Ørsted-Jensen also identifies a number of sites where massacres of Aborigines occurred and others where  conflict between the colonists and the Aborigines resulted in great loss of life by both groups. I would like to suggest that memorials could be built at some of these sites run by Aboriginal descendants as part of the the process of coming to terms with our past.

…Ørsted-Jensen launched himself into the 'history wars' debate, with a powerful critique of Australian journalist Keith Windschuttle's series of articles entitled 'The Fabrication of Aboriginal History',

... In these articles, Windschuttle was highly critical of the 'black armband' brigade of historians, who he claimed had fabricated the notion of frontier warfare and sustained Aboriginal resistance to white settlement in Australia.

For Windschuttle, the absence of hard evidence in the form of a body count, black or white was sufficient reason to discredit the existence of frontier warfare during European settlement. Windschuttle discounted contemporary claims of violence as being 'Exeter Hall cant' or created by the 'Church party' lobby....Ørsted-Jensen demolishes both arguments.

This book is a timely reminder to historians generally, but to Australian historians in particular, that 'the core issues' of history are 'the struggles, sufferings,welfare and rights of all mankind'. Ørsted-Jensen is critical of Australian historians whose craft focuses too heavily on writing history primarily as a 'nation-building exercise', while other less creditable aspects of our history, he claims, such as frontier violence, have been glossed over, or (in Windschuttle's case) even dismissed as a 'mythological construct'. History, he reminds us, is a social science not an 'endless salutation of perceived heroic sacrifice or the grandeur of victors'.

Frontier History Revisited is convincingly argued and passionately written, and deserves its place alongside works by such other frontier historians as Henry Reynolds and Raymond Evans.

See also the on line review in the journal '
Aboriginal History' Vol 36.
http://epress.anu.edu.au/apps/bookworm/view/Aboriginal+History+Volume+36,+2012/10311/review-orsted.html 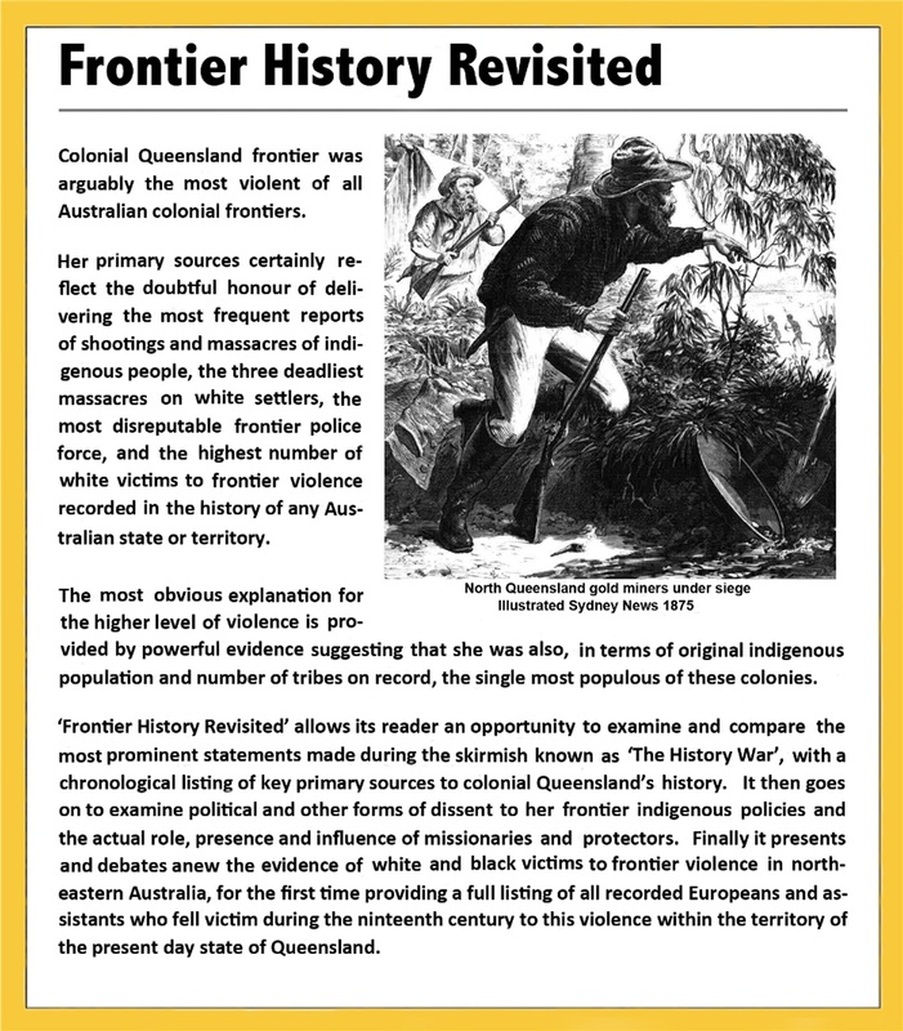 Below is a peek at some of the early pages of the book. 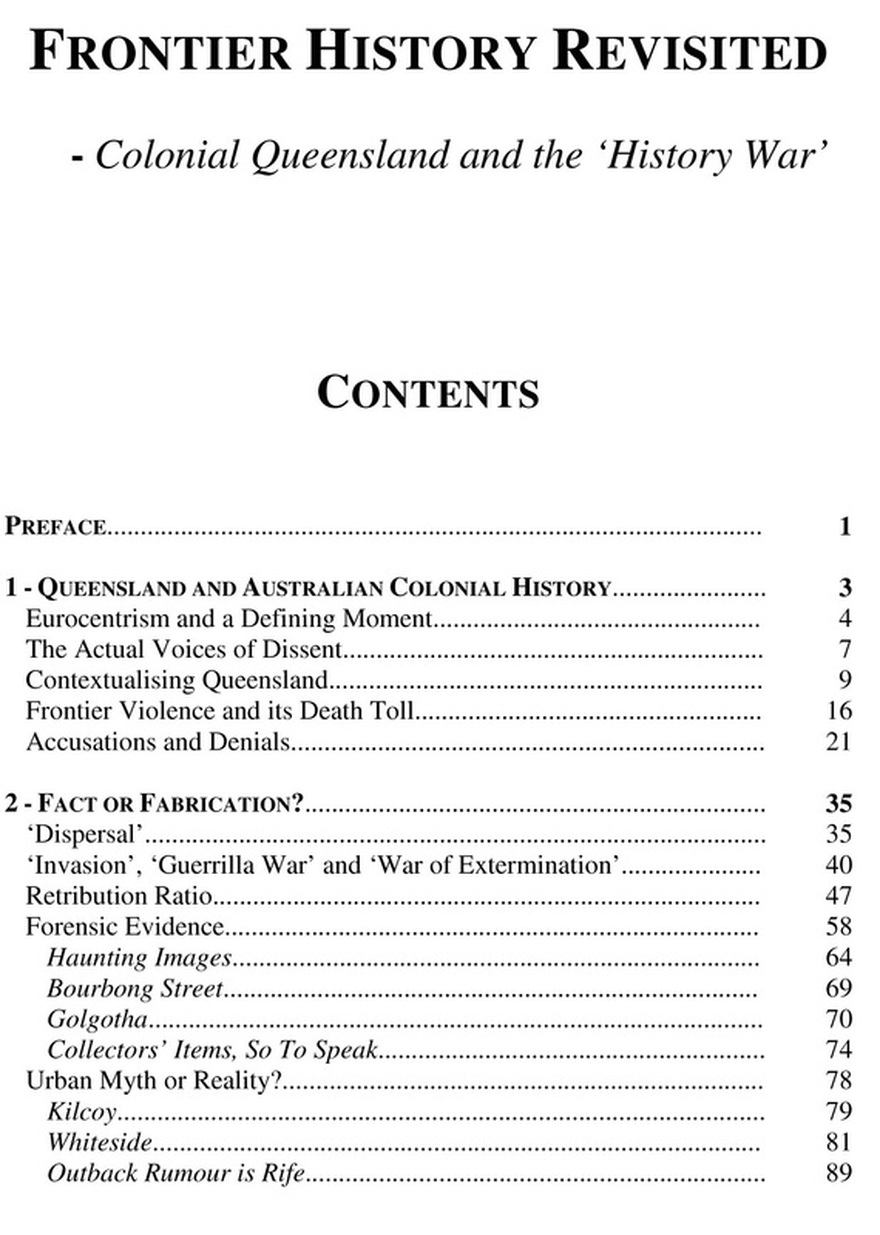 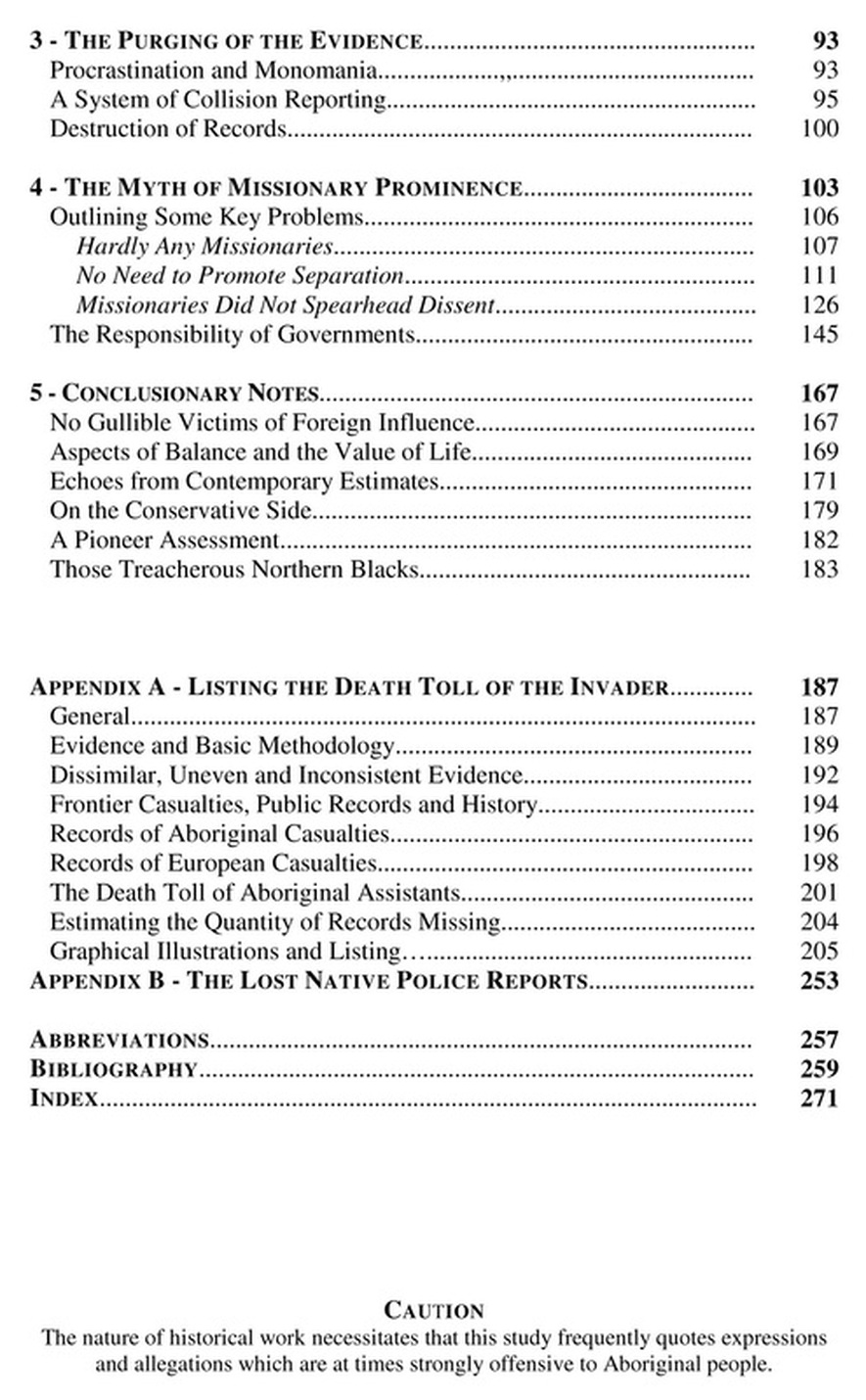 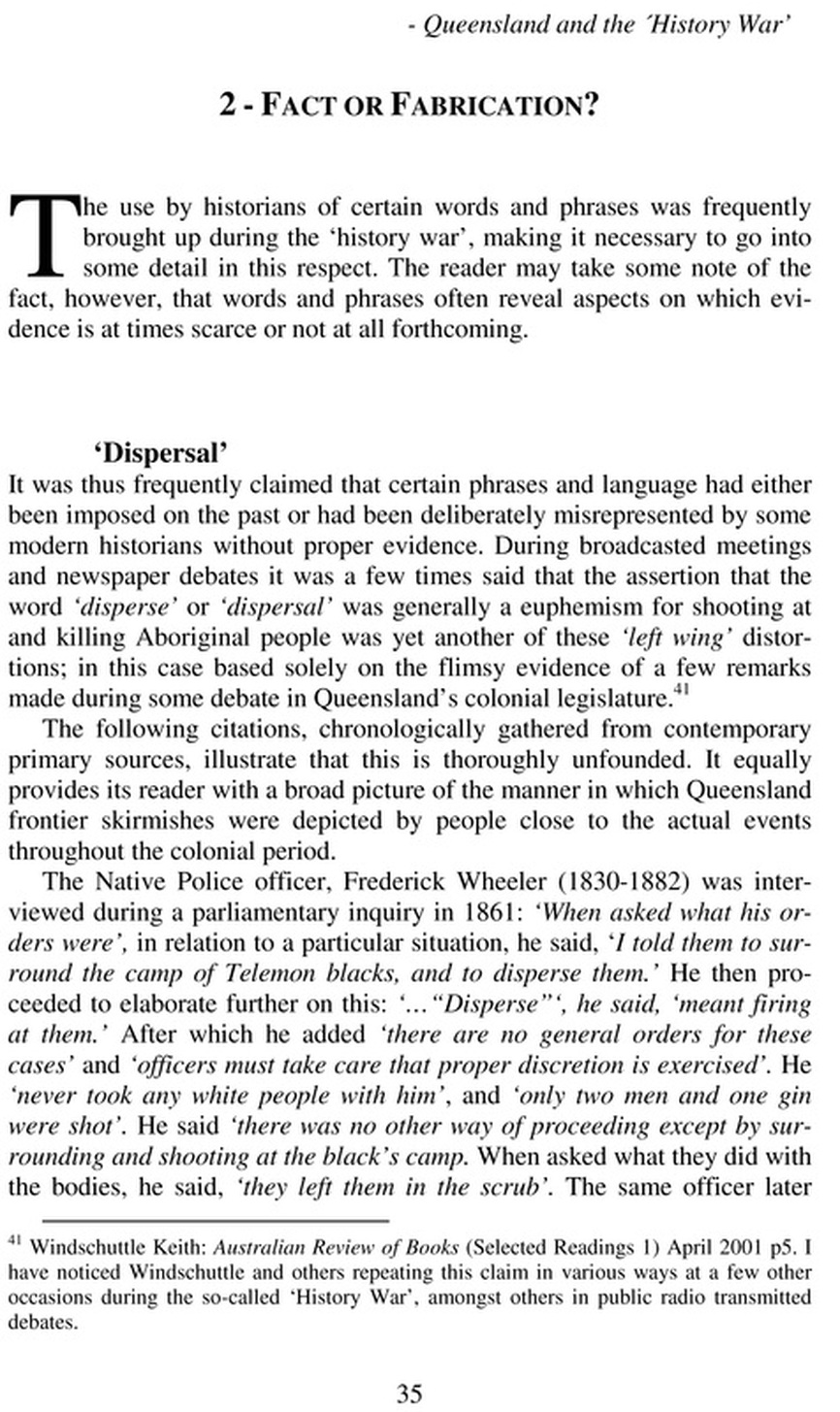 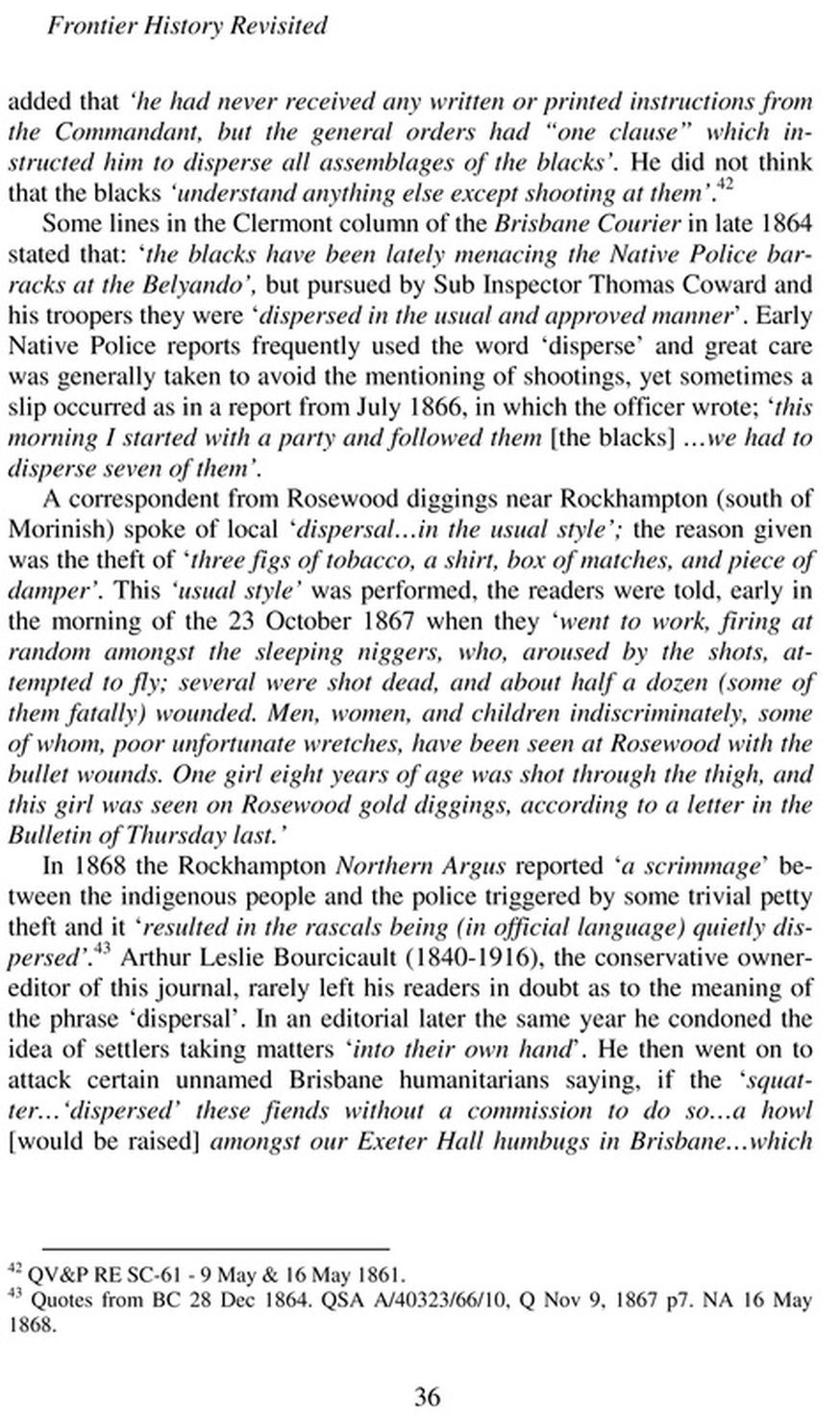 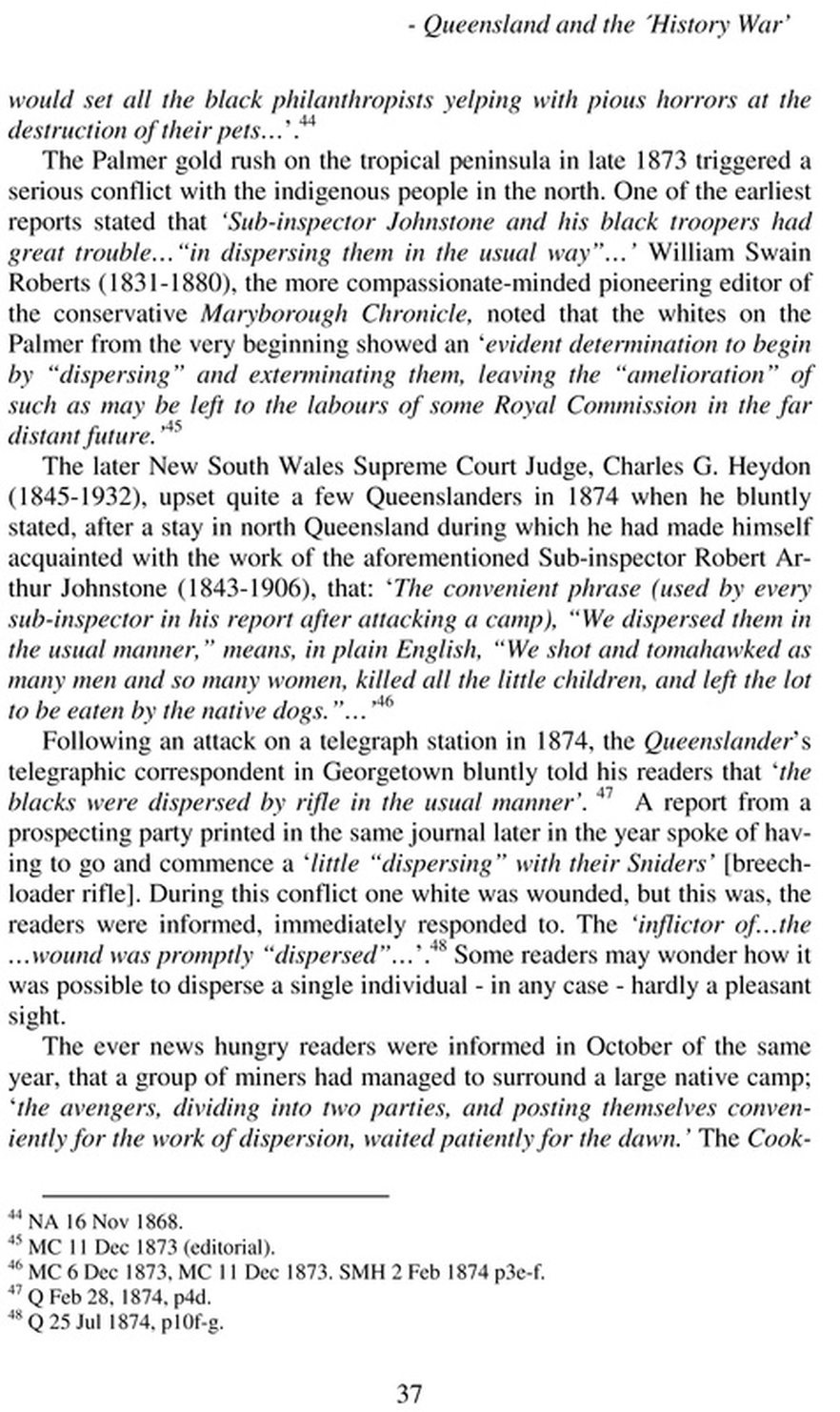 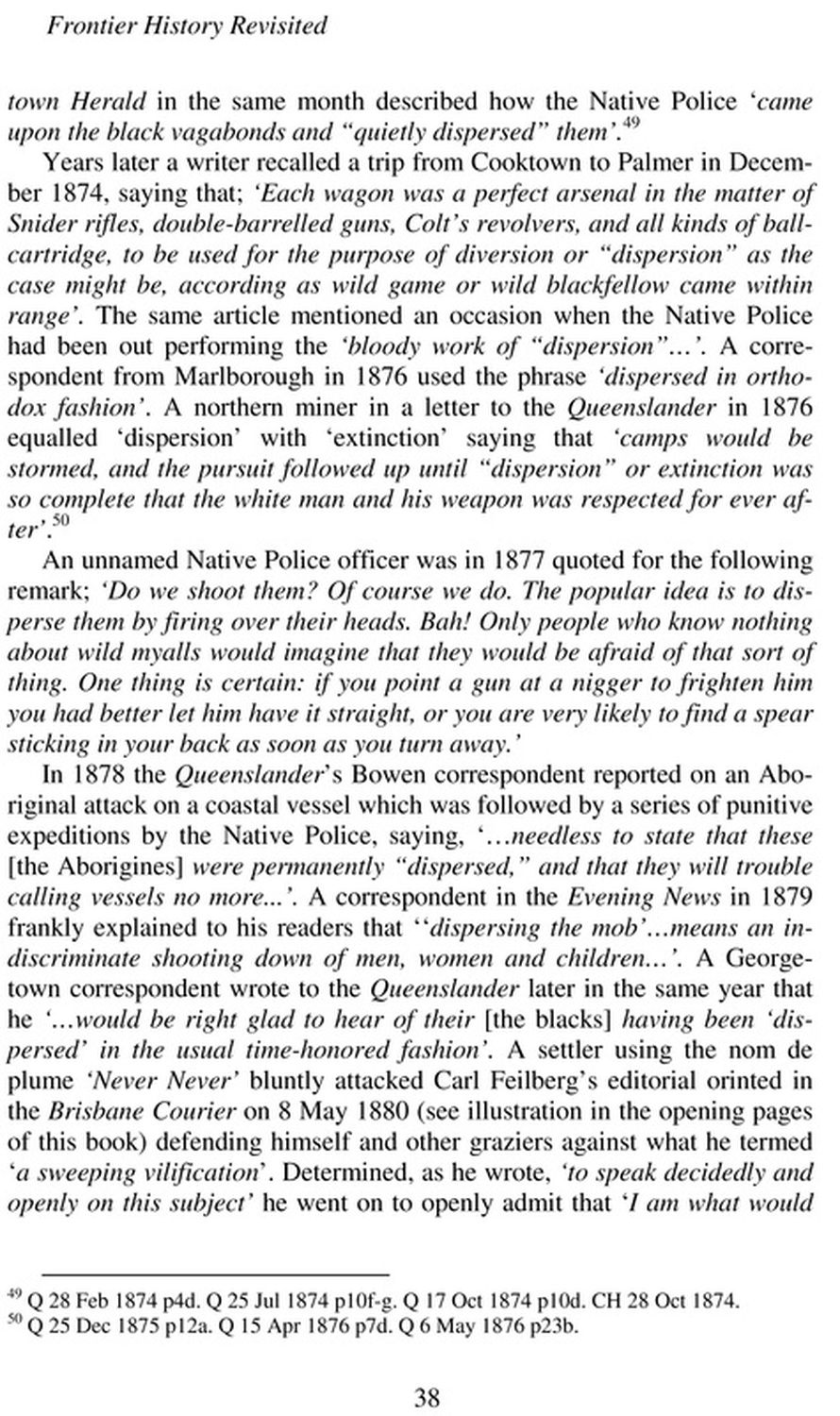 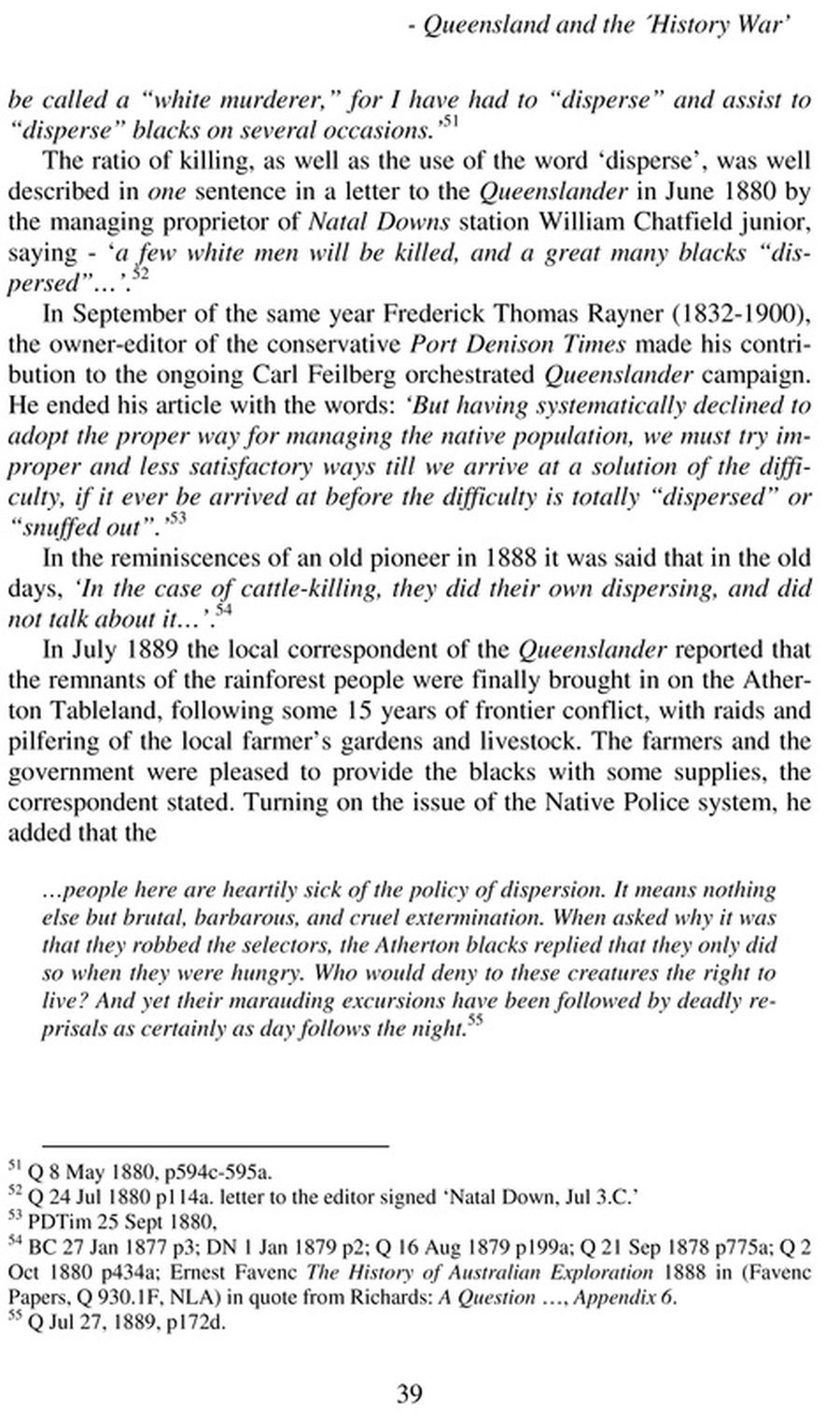 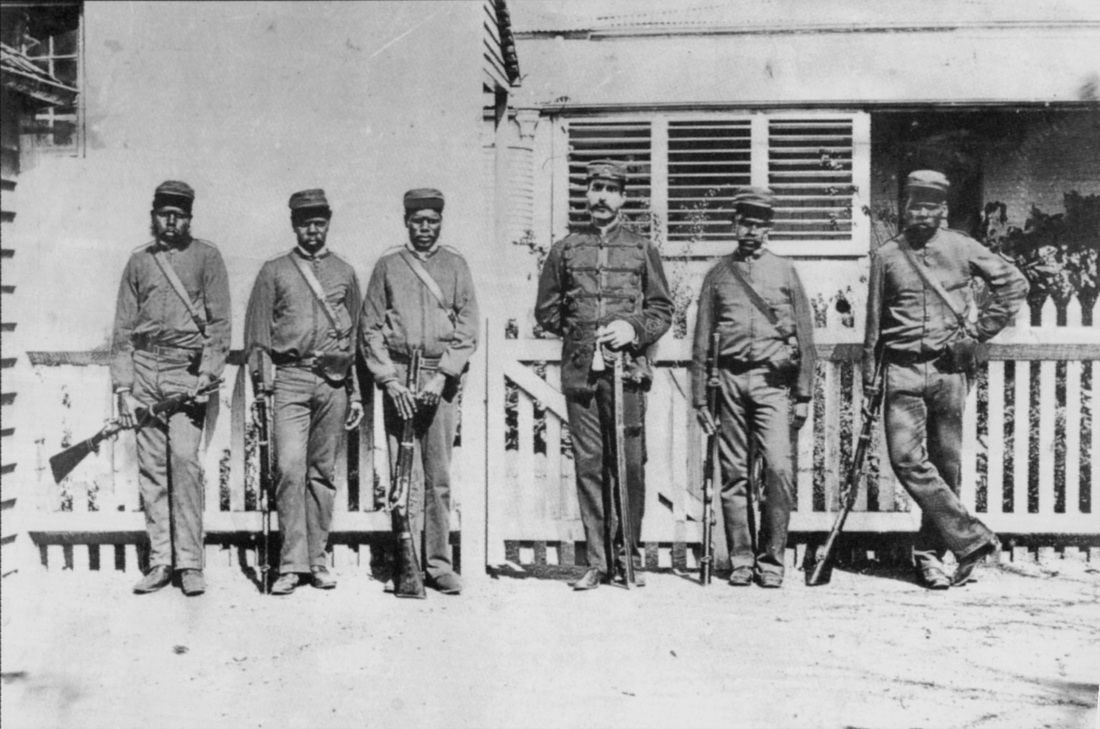 Native Police Sub-Inspector Stanhope O'Connor and his detachment photographed in Cooktown's main street in March 1879. This was only days after the infamous Cape Bedford massacre of what was later described as 'thirty-one bucks bathing on a small beach' of which 'all but three were accounted four' (Browne, R.S.: 'A Journalist Memories', Brisbane 1927, p27 and just prior to their departure to Melbourne and the colony of Victoria, where they would be crucial in the hunt for the famed outlaw Ned Kelly and his gang.

In the review section of The Age, The Sydney Morning Herald and The Canberra Times (in the weekend August 10-11 August 2013), Professor Raymond Evans, utilises a story which appears on page 69-70 in the book advertised above, for his review of Reynolds' 'Forgotten War'.

Below is an extract from those very pages, feel free to use them, but please recognise the source:

"In January 1895, the conservative-oriented MLA for Burrum, Nicholas Edward Nelson Tooth (1843-1913), one of the original squatter-brothers Charles, Nicholas and John Tooth who took up Collanne station (now Kolan near Bundaberg) some time during 1861, wrote a letter to the Bundaberg Mail. He wished to enlighten the readers of the origin of the placename ‘Bourbong’, the name of Bundaberg’s main street. It was derived he explained, from the Gureng Gureng word ‘Bier-rabong’, the meaning of which is ‘plenty dead.’ ‘This is where North Bundaberg now is’, he explained,

…neither for love nor money could we ever get any blacks to go near the place. We knew it was on account of some superstition, but it was a mere chance that revealed the cause. Two or three of us were one day looking for ebony wood (for stockwhip handles), when we suddenly came on a heap of human bones, among which were fifteen or twenty skulls. …At first we thought it was an old burying place of the blacks, but I afterwards learnt… that it was the spot where the Native Police had come upon a large camp of blacks and dispersed them.[1]

Is it not rather symptomatic for the general treatment of Australian history that people in Bundaberg still do not generally know the reason why the street carrying all of their main ‘cafe au lait’ and ‘cappuccino’ outlets is named Bourbong Street? If, on the other hand, the name had been like say Kokoda, we may rest assured that they would all have known why that was. Indeed, there is no reason to doubt that the other ‘plenty dead’ reasons for the naming would have been even more regularly celebrated at that very spot than is already the case! Thus, being the main street in the city, Bourbong Street naturally has a huge ‘Memorial to the Brave’ commemorating - ‘lest we forget’ - the Australian ‘diggers’ who fought and died for their country at various overseas battlefields.


Extract from p.69-70 in the book Frontier History Revisited - Colonial Queensland and the 'History War' by Robert Ørsted-Jensen 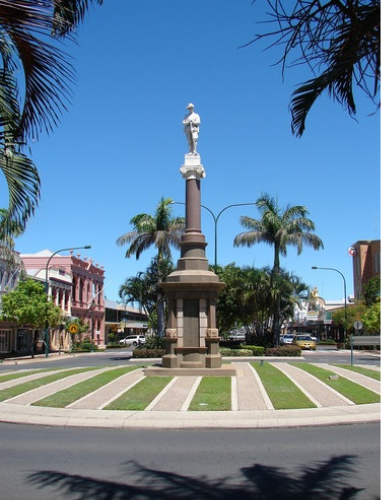